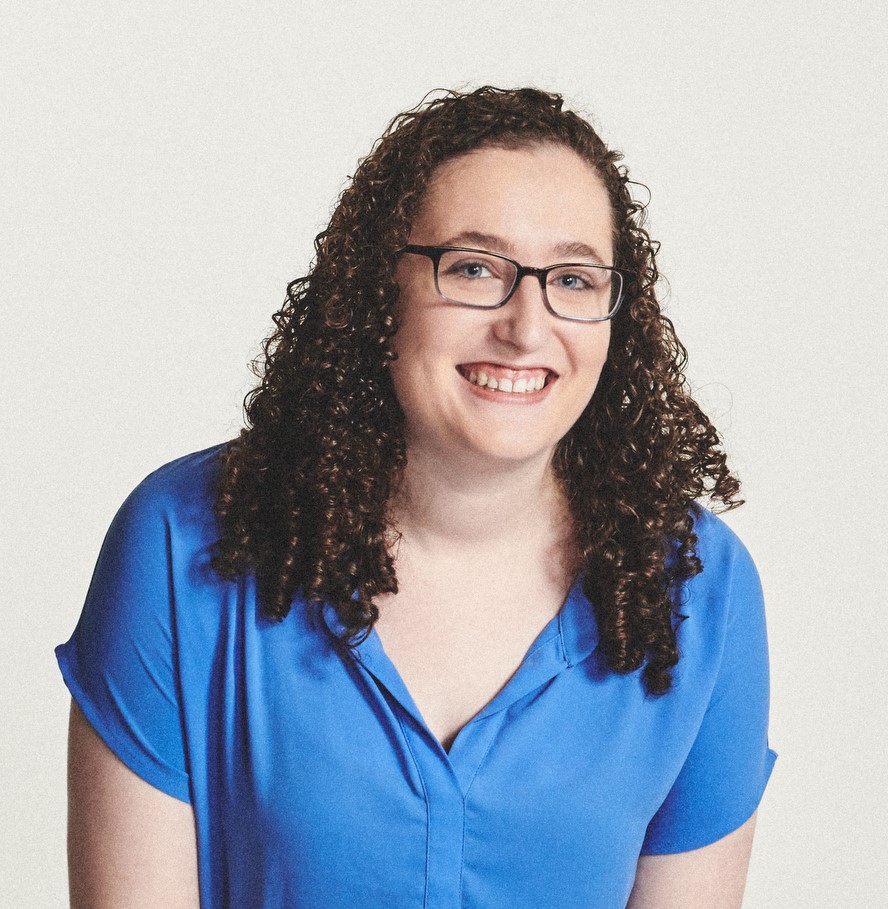 When I was graduating from Wesleyan in the summer of 2016, I was amongst the lucky few who had a gig lined up for June. I had reached out to a friend-of-a-friend (class of 2015) the winter prior, because she was working in marketing for a film distribution company whose films I really enjoyed. We grabbed an informal dinner and I asked her about how she liked her job and was navigating life after college. At the time, she told me GKIDs – the company she was working for – likely wouldn’t be hiring. But when April rolled around, the call for internships went up and I was ready. I got the internship and spent my first year out of Wes in production-adjacent jobs. First, making GIFs and doing outreach for GKIDs and then making a huge leap to the office next door, where I worked as the Programming and Operations Assistant for the New York International Children’s Film Festival. Both of these jobs were lovely. The people were nice and I didn’t find myself doing any of the tasks I was told my first jobs out would include: fetching coffee, mindless busy work, etc. But, I still had the lingering feeling that production was where I really wanted to be. My ultimate goal, was to become a writer or producer down the line (or so I imagined). Now that I felt confident  that I could thrive at an industry-adjacent job, I figured my next step was to start paying my dues, meeting the right people, and working my way up the ladder more immediately behind the camera.

I asked those around me about how to get started, and while I didn’t end up with any direct ties to the production world, I was pointed in the direction of a Facebook group for production jobs and day-playing. I saw a posting for a two-day job based in Long Island that was prioritizing locals, so I sent off my resume. In a few hours, I had booked my first gig; it turned out to be a Netflix production and after a day of building IKEA furniture for the production office, I got pulled on as the Art Department PA for four months of the film shoot. That was June 2017 and I’ve been working consistently as an Art PA since. The job mostly consists of organizing and distributing drawings and classic PA runs, but the nice thing about the art department though is that you deal with less garbage — both figuratively and literally. So, I stuck with it. Over the course of the year, I’ve become more interested in the graphics department, which works to create all the signage, logos, paperwork, and photo elements that exist in the background of shows. It’s a really cool opportunity to contribute to the universe of the show and also do artistic work on a day-to-day basis. I’m now working on Madam Secretary and am PAing with the graphics department specifically, which has been amazing for training me and helping me build a portfolio to ultimately join the union.

While all of this has taken place over the past two years, I was simultaneously working on a card game called Someone Has Died. It was a group project I started with at Wesleyan with Ellie Black (CEAS & FILM ‘17) in CFILM’s “Video games and/as Aesthetics” course. I went into that class looking to learn more about narrative in video games and came out of it with a hilariously dumb party game. The class responded really positively when we presented it and both of us couldn’t help but think that we should try to see it through. During my first year out of school, I started looking for ways to playtest, refine, and exhibit Someone Has Died. I began attending game design meetups and Playcrafting expos, which featured hundreds of games-in-progress (both digital and analog) looking for player feedback. I started meeting other game designers who were had Kickstarted their projects and were giving me advice about how I could do the same. After seeing that people were really enjoying Someone Has Died, I recruited my friend Liz Roche (ENGL & FGSS ‘16) to join the team and we started aiming higher. 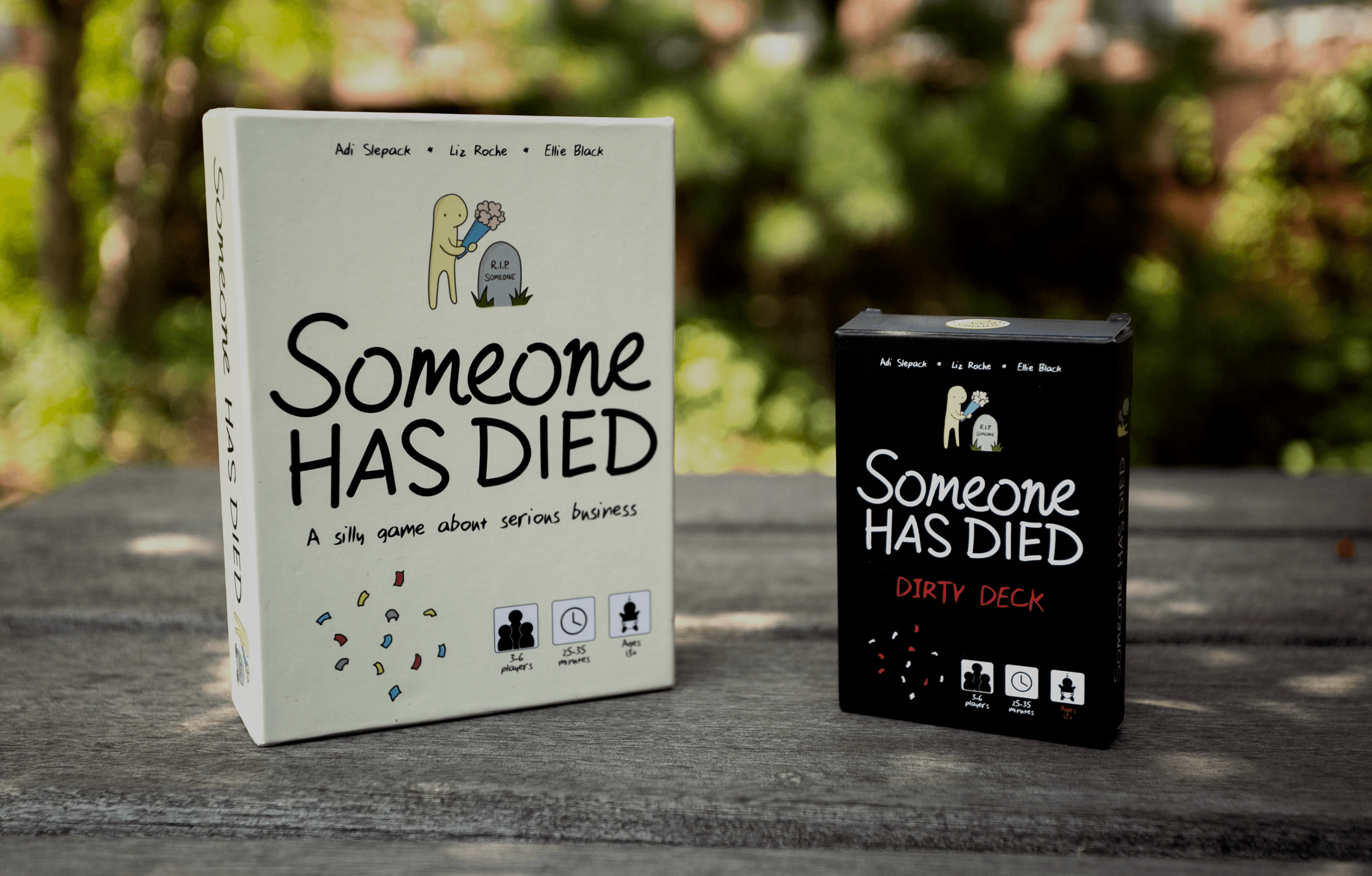 In December 2016, we found out that we were accepted to showcase with Indie Megabooth at PAX East, one of the biggest game conventions in the country. In 2017, we exhibited not only at PAX East but also at PAX West, IndieCade, the Boston Festival of Indie Games, Five Points Festival, and PAX Unplugged. In September of that year, we launched a Kickstarter campaign to fund the first print run of the game; we asked for $15,000 and – to our surprise – made over $50,000. The process of fulfilling the Kickstarter campaign was a daunting and arduous one, especially for two bozos who hardly knew what they were doing. That being said, after six months of playtesting and producing additional cards and another six months of finishing artwork, coordinating manufacturing, and waiting for shipments, we pulled it off. We had a lot of support, mainly from Kickstarter itself; they invited us to exhibit with them at conventions and accepted us to their Creators in Residence program in the summer of 2018. While working out of their offices, we were given an office space to take ourselves seriously and also to hold a packing party to have people help us with rewards. Now that the Kickstarter is entirely fulfilled, we’re looking towards the future – a second printing for Someone Has Died and hopefully more games to come. 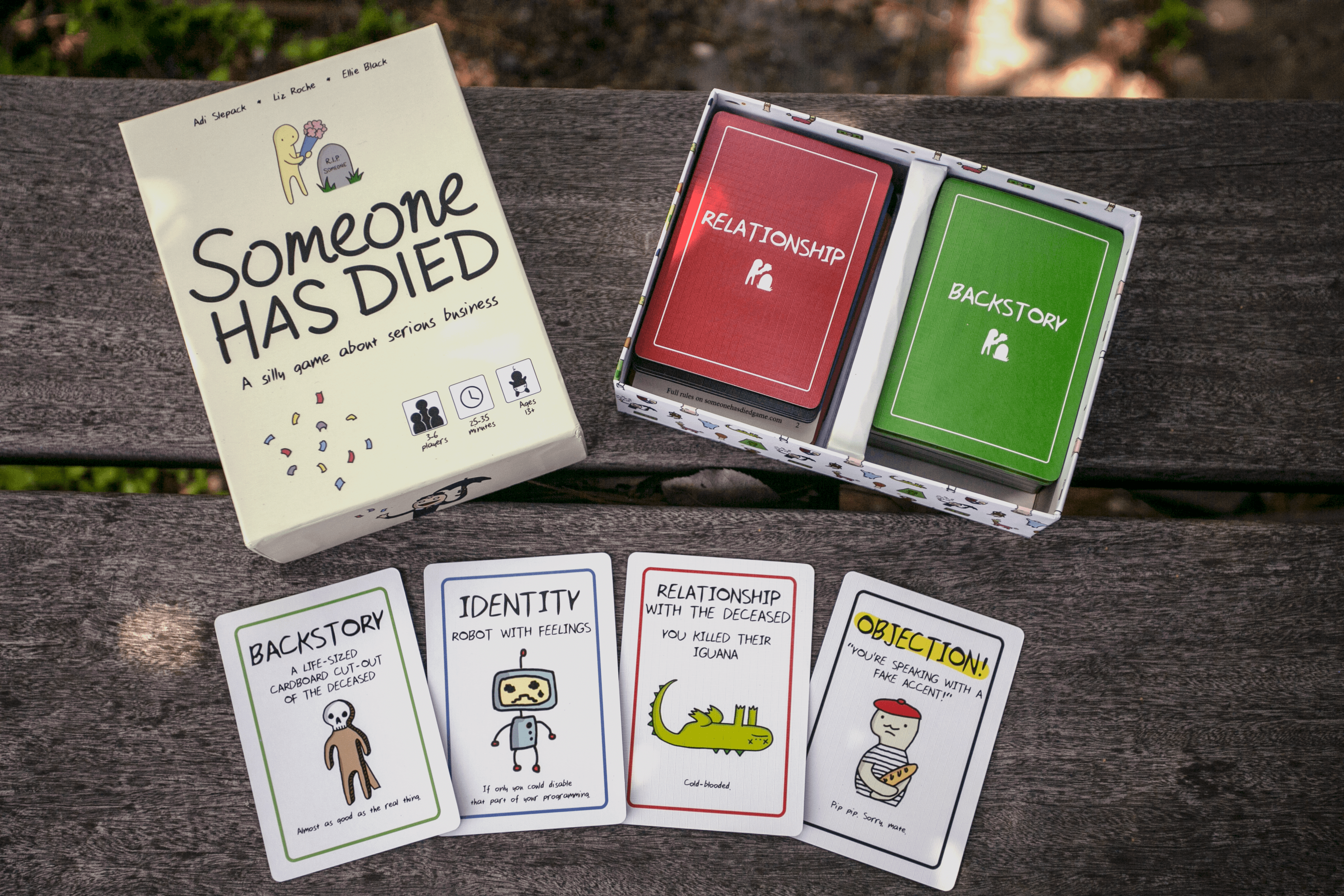 On a personal level, working on my own venture while simultaneously working my way through the film industry has been inspiring, but also… unexpected? My career trajectory is not at all on the track I foresaw when leaving Wesleyan. I’ve always liked fiddling around in Photoshop but never imagined myself seriously pursuing graphic design, let alone producing a card game that ended up at conventions and store shelves. But the other side of the coin is that I’m more confident in my  ability to produce projects on my own. I recognize my value in a way that makes it hard to think about spending much more of my time making runs and coffee. Even if it’s not what I originally set out to do, I’m now steering my career in the direction of utilizing my creativity to its fullest potential and am excited to discover what surprises lie ahead.

Adi Slepack’s personal work can be found at her website!