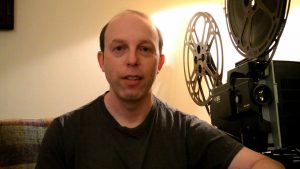 You will need both sides of your brain for the course I’ll be teaching this spring, “Silent Storytelling”. You use both anyway, but it’s that right brain of yours that is more engaged in the silent film experience. That’s more of what’s at the core of the trajectory we’ll cover.

The course traces the development of film’s visual storytelling language, from the early 1910s all the way through the end of the silent era. What we’ll see, experience, and process – and with live piano accompaniment at every class! – is the gradual decrease of onscreen information being spoon-fed to the audience so that more of the storytelling is assembled out in the theater by the movie-goer.

In my work as a silent film accompanist over the last 35+ years, I go on each film’s journey right along with the audience. Silent film accompaniment is about taking in both the film and the audience. I use music to synthesize the two so that the audience is able to connect emotionally with the drama or humor of the film and engage in that pure cinema dream-state. Doing this has for thousands of films at thousands of shows made me much more aware of the language of cinema and how it’s “spoken” to and understood by an audience.

Silent film didn’t know it was missing anything at the time. Until talkies ended the medium in 1929, silent movies were just called “movies”. Silent cinema utilized every element at its disposal to tell stories, entertain, and move people, and every bit of film language was developed and used to a poetic maximum during the silent era.

Kevin Brownlow, the Academy-Award-winning silent film historian, archivist and restorationist, wrote that with silent film, the audience is the final participant in the filmmaking process. That’s the right-brain part of silent film I was referring to. We’ll explore this during the course, right along with all that historical information and factoids that’ll go into your left-brain.